One common issue that people have lamented over the years on Twitter and App.Net is the inability to do much with favourited posts. The verbiage can also come across as wrong depending on the content of a given post, as we would never want to "favourite" or "like" a post that has a link to an abuse support group or something else that we want to save for later. There's also a problem where a single verb cannot fully encapsulate why we are trying to save a given post for later. Am I favouriting (or starring or liking) this post because I love the pictures displayed? Am I favouriting (or starring or liking) this post because it has a link to a news article about H5N1 bird flu that I want to read later? These are very different things!

When the concept of Blurbs was being flushed out, one of the problems I wanted to solve was the ambiguity involved with the various interactions a person can have with a post. It's completely possible to star a Blurb on 10Centuries, just like we can see on social networks across the web. But there's another function that might prove useful to people, and it's available to everyone as of today: Pins. 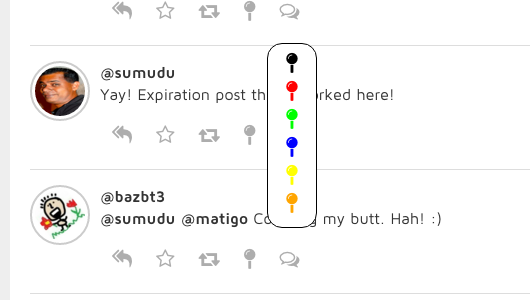 Pins are a way to save and organise posts for later use. Just like the physical object they're named after, these Pins come in several colours an can be used to mark a post (or any object, really) for later. There are, however, some distinct differences between Pins and Stars or Reposts.

The first difference is that Pins don't come with a pre-defined notion of meaning. You can use a colour coding scheme that makes sense to you, and nothing in the system will tell you otherwise. The second difference is that your Pins are invisible to everybody but you. Stars and Reposts are openly visible to everyone, including the person who published the post. Pins, however, are private. This will reduce any stigma one might have by using pins of a certain colour. More than this, though, it's nobody's business to see what you're pinning for later or how you organise your colours. Some things are just better off private.

Pins are quite easy to use. Just like with Stars and Reposts, simply tap the Pin icon on a Blurb to open a window of coloured Pins. Choose the one you want, and that's that. The Blurb's Pin will automatically switch to that colour. Want to change colours? No problem. Simply change it to whatever other colour you prefer.

As I said up above, Pins are now available to everyone who is using 10Centuries v4. Enjoy!